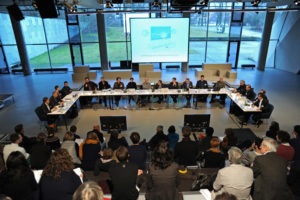 Over the course of 2013–14, Haus der Kulturen der Welt (HKW) in cooperation with the Max Planck Society, Deutsches Museum, the Rachel Carson Center for Environment and Society, and the Institute for Advanced Sustainability Studies facilitated The Anthropocene Project, which produced situations for engagement and supported new forms of research and practice. Several exhibitions, public events, workshops, and publications all helped elucidate the concept of the Anthropocene across disciplines and brought it to greater public awareness.

In 2012, two workshops were held at HKW to discuss salient issues in researching the Anthropocene. In close partnership with the Max Planck Institute for the History of Science (MPIWG), these offered young researchers from a broad range of disciplines the opportunity to present their individual research perspectives. 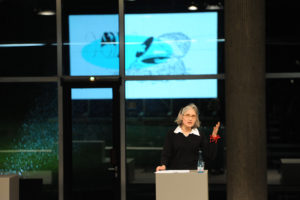 At the opening of The Anthropocene Project in January 2013, two further workshops convened to present and discuss ongoing aspects of research. First, the Anthropocene Research Forum widened the scope from individual research to institution-based projects. Presentations of five different academic initiatives from across Europe provided insight into an already established landscape of active Anthropocene research and emphasized the multifaceted scientific as well as political potential of the topic. The second workshop, titled Anthropocenic Research Roundtable, brought together 20 individuals, each a leading figure in his or her respective field, to consolidate visions for exploring alternative forms of knowledge production and collaboration. This unique constellation of scholars formed a roundtable that fuelled lively discussion on the future design of a scientific community that can live up to the challenge of the Anthropocene. Many concerns expressed at this roundtable revolved around the future role of education. 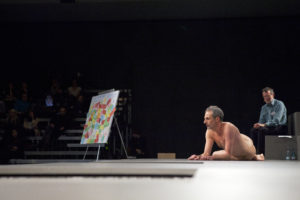 The Anthropocene Curriculum project started by inviting a group of 27 renowned instructors—many of them being part of the Anthropocenic Research Roundtable—to enter a general interdisciplinary conversation on the projects’ non-public online platform and to develop core subjects for the Anthropocene Campus in November 2014.

This conversation deepened and intensified at a three-day preparatory meeting where the instructors gathered to discuss their different pedagogical and thematic approaches, composing a multi-faceted set of nine seminars for the Anthropocene Curriculum. 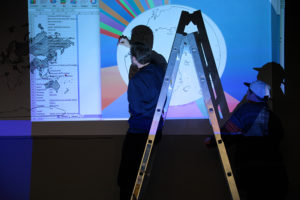 The Anthropocene Curriculum was realized for the first time in November 2014 as a nine-day Anthropocene Campus, involving a group of more than one hundred international postgraduates from around the globe. The Campus provided the opportunity to engage in a series of nine different seminars that were collectively prepared over the course of a full year.

Accompanied by a public program and concluding with a larger public forum, the specific role of education in the collaborative development of vital cross-topics for future engagement was extensively discussed. The Campus itself was a central component of a series of interrelated events—public exhibitions and fora, screenings and talks—at HKW, with which the two-year The Anthropocene Project came to a close. 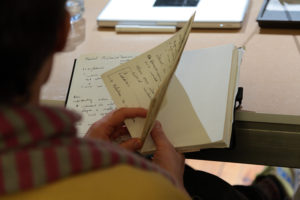 The seminar topics aimed for a kaleidoscopic and resourceful approach that would create a knowledge base both broad in disciplinary perspectives and out of the box of traditional forms. In this way, the exemplary courses served as a springboard for creatively developing mutual understanding of recursive themes and tropes foundational for Anthropocene research and knowledge. The individual seminars, their contents, materials, and methodologies as well as their outputs can be viewed on the project website anthropocene-curriculum.org.

April 2015
Call for Seminars for the Anthropocene Campus: The Technosphere Issue

Preparations for a second campus started in spring 2015 by requesting proposals for a new set of seminars. Along with investigating the diverse subject matter and implications covered by the concept of the Anthropocene, this second campus was devised to explore the “technosphere,” a global system that interacts with other Earth spheres such as the biosphere, or hydrosphere. 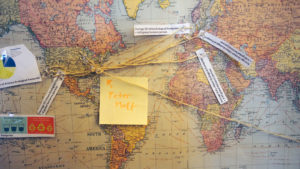 In parallel to the momentum of the inaugural events of the project Technosphere (2015-18) at HKW, the instructors of the second Anthropocene Campus gathered at MPIWG to finalize the set of themes and methods as well as the overall structure of the second campus. 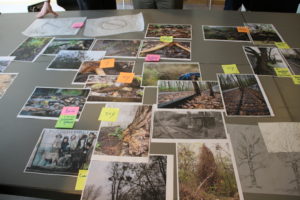 The second Anthropocene Campus enrolled 120 participants and 50 instructors in ten seminars. The majority of these seminars were oriented toward offering conceptual blueprints of the technosphere. The seminars looked at the technosphere’s installment and growth, focusing on its current constitution and evolving nature. They examined its specific formative power and the world-changing dynamic it has unleashed. It attempted to describe its specific architectures and modes of operation from an explicitly transdisciplinary angle using questions designed to translate the broader engagement with the Anthropocene into concrete problematic situations, rendering the whole issue better accessible and understandable. 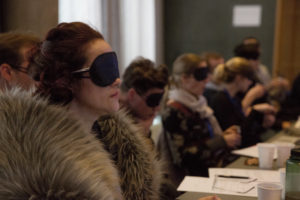 The internal seminar structure of the campus was augmented by three public evenings—entitled Technosphere × Knowledge—where instructors from the Campus as well as other academics, artists, and thinkers investigated the interlacing between current knowledge production and the technosphere.

With the anthropocene-curriculum.org website now launched and the internationalization of its general enterprise being set-up with a host of partners, we seek to establish a network-oriented open platform for diversifying such kinds of experimentations and initiatives at different locations around the world. HKW will thus act as a central hub within a more diverse landscape of international efforts, sharing its network of people and know-how, and hosting the web-based platform which acts as a portal to promote and share results of these local experiments. HKW will also host another Anthropocene Curriculum event in 2019, relaying the project’s further development by gathering ideas developed elsewhere and locating intermittent tendencies and their forms to further guide the process.