Between Sadness and Awakening

By Brian Holmes. Reposted from HKW’s 100 Years of Now Journal.

What does a modern university do? It adds a new geological layer to planet Earth. By collaborating with corporations, governments, and the military, university scientists help to create the technology that drives the era of anthropogenic climate change. And by devising organizational forms, managerial schemes, logistical processes, and financial innovations, academics help speed up global industrial production, intensifying the Great Acceleration that began after World War Two. But that’s not all the Cities of Knowledge can do. As humanity wakes up to its new role as a geological agent, universities may shift large parts of their formidable invention power toward the limitation and mitigation of climate chaos. That’s the hope that drew me to participate in an experimental curricular development program, the Anthropocene Campus at the Haus der Kulturen der Welt in Berlin, for its second edition focusing on the Technosphere.

The Anthropocene Campus is not a traditional study center or academic retreat, but instead, an audacious cultural program. Outside the university proper, it attempts to model possible future developments of transdisciplinary scholarship galvanized by the threats of onrushing global warming. To do this it uses two main resources. On one hand, carefully selected public talks, debates, performances, and screenings bring together scientists, artists, and scholars of all horizons, as part of what HKW director Bernd Scherer terms “an attempt to curate the concept of the Anthropocene as it emerges.”

On the other hand, the Campus as such is based on open calls for seminar proposals bringing together groups of “conveners” to lead two-day sessions focused not only on the presentation of knowledge, but also on conversation, collaborative production, and live debate. Two full seminar programs have been carried out, the first in November 2014 and the second in April 2016. As a convener of one of the 2016 seminars and as a speaker in one of the evening programs, I got a close look into the way this complex structure operates. 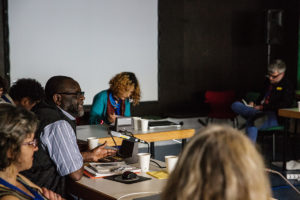 Around 150 participants were drawn from the worlds of the humanities, science, and art, plus a few hackers, activists, and media-makers. Although a majority came from the Euro-American societies, it was fascinating to be able to converse with people from Asia, Africa, South America, and the Middle East, each of whom brought vital perspectives on problems as common as the atmosphere. Ten seminars were spread out over a period of six days, with additional opening and closing sessions. Every other day, a short morning plenary brought you up to date on what the other groups had explored. At night, if you could still handle it, some mind-blowing lecture, film, or performance put a new spin on the day’s challenges. It was non-stop intensity, but most people did not seem to want to miss any of it.

Although there’s no way to verify whether everyone shared this feeling, for me the event was marked by the simultaneous sense of exhilarating awakening and deep sadness about the damage that has already been done. Even the sadness was a relief. In our achievement – and entertainment – driven world, one rarely finds the solace of concentrating on common concerns over an extended period. Whether at breakfast, during the day’s sessions and coffee breaks, or late into the evening, you were constantly encountering different faces, different voices, and significant variations on a universal theme. Climate change is the sum of such micro-variations: volatile and unpredictable patterns within a global dynamic whose contours are becoming ever more distinctly visible. 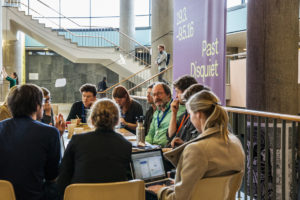 Contributing to this event fostered a sense of responsibility. Our group of conveners, all from Chicago, met frequently to prepare our theme “Governing the Technosphere”. For us, the notion of a world-spanning technological system evolving at scales beyond human agency was understood as a provocation, a dramatic image of alienation that we wanted to overcome. Our hypothesis was that the metropolitan scale internalizes all the operative features of global technology and then reprocesses them into new and different forms. We sought to represent these local instantiations of the technosphere, to track their extension to continental scale, and to see if we could isolate tangible protocols of governance where the agency of real human beings (and not just abstract humanity) could be identified and discussed.

As cultural critics and artists, we felt daunted by the quantitative methods of science, which we strove nonetheless to incorporate in our analyses and expressions. The challenge was to prepare a multifaceted approach that might become valuable for presumptively anyone: a philosopher, a scientist, an activist, a policy-maker, an inhabitant, a mother or father, a kid at school, a random individual seeking a definite proposal about a complex world.

Was the reality what we had prepared for? No, not exactly: in the end, it was a lot more like the familiar humanities! Yet this was a university of urgency and of intimacy, more transdisciplinary, less competitive, more to the point. To judge by the texts and videos, the first 2014 Campus was a lot heavier on the science. The public programs leading up to it included the first in-the-flesh meeting of the entire Anthropocene Working Group, which is the disciplinary body deliberating about whether we have really entered a new geological era. Talk about curating an emerging idea! Our edition seemed to be fulfilling the concept of the experimental university by filtering the core scientific data into varied realms of intellectual culture, with a broader purchase on society and everyday life.

One got a sense of the promise, but also the difficulty that a profound shift in academic priorities would entail. We are accustomed to the luxury of infinite debate about finer and finer points. The concept of the technosphere lends itself to exactly that, as so much of Science and Technology Studies already shows. Yet that same concept designates an active, fast-evolving threat that is bound closely with our own endeavors, and especially with knowledge production. Maintaining the sense of urgency, while opening up the experimental space of inquiry is the very essence of this program.

From my perspective, the two editions of the Anthropocene Campus in Berlin, with their surrounding public events, have successfully internalized the global debate on humanity as a geological agency. The governance effect, carried out by HKW in collaboration with the Max Planck Institute, was to reshape the scientific debate into the model of an experimental university. Now it is time for the attendees to transform this process in their own local environments, in order to achieve a worldwide dispersal and, perhaps, a jump in scale.

A further extension of the fields of inquiry would be possible – for example, toward sharper questions about economic power and environmental justice, or about the roles of the university itself in the generation and the mitigation of climate change. Will this really happen? It’s impossible to say. A responsibility has been offered to all of us, by all of us, through this complex program. But we, both the conveners and the participants, still have to take up that responsibility and make it real.